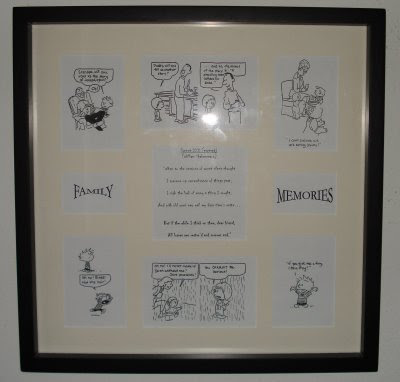 Every year I like to do something in addition to the regular presents I get for my family. Here's what I have done over the past 3 years.

2008: I created a game board to be reminiscent of the game Life, using pictures of the 4 seasons as my background. On each of the silver game tiles, I placed an event from our brief and farcical family history.

2007: I cut out a round piece of silver paper and etched lines on it to look like a record. I put it in a record frame and listed its "contents" on the front. I chose a real song that commemorated what was going on in each of our lives at the time (for example "Chapel of Love" for my little brother and his fiance who were getting married that February). I made up fake band names that referred to the person the song applied to.